David grew up in a tight knit community of friends and family. He attended a Christian school and participated in church activities with his friends, strongly rooted in his faith. At the age of 9, changes in his family’s life precipitated relocating to another town.

Alone, and without his familiar network, David began to seek support from friends who shared a different value system. These new friends found entertainment in drinking and drugs. He knew it was wrong, but his desire to fit in drowned his conscience and David took his first drink at the age of 11. This was only the beginning; his desire for alcohol would increase with each 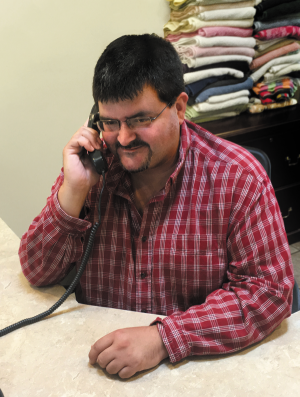 Throughout early adulthood David’s alcohol consumption began to change him. Dark thoughts consumed him and he began to believe it didn’t matter if he lived or died. Still consumed by darkness, he married and had two daughters. After just a few years, they divorced. With no will to live, David’s addiction increased to the point that he was not eating nor caring for himself, often consuming nothing but alcohol. “I could have easily killed or hurt someone over these years of recklessness. “

In February 2015, he nearly did succeed in killing himself. “Others presumed I would soon be found dead.” David was rescued by EMTs 4 times in 3 weeks from seedy hotel rooms. On the last rescue, the medical team questioned if he would awaken from his comatose condition. But God had other plans and David woke up on February 22, 2015, with a big decision to make – life or death. He chose life arriving at the Muncie Mission February 27.

The journey to recovery was not easy but he decided to listen and actively participate in his recovery. He began meeting with the counselors, setting goals, working hard and socializing with other residents. As the program continued he realized the error of his former thinking that God had abandoned him. It became clear that even when he was trying to run from God,  He had been with him all along. As he began to remember his former way of living he was filled with regret and realized how depraved his soul was; he felt truly convicted. But, most importantly, he realized that not even the corruption of his past could ever separate him from God’s abounding love and he looked to Jesus for his salvation.

“I had a priceless tool I didn’t recognize at first, Grace. God has always been carrying me.”

David now says that the Mission reestablished his foundation in Christ, enabling him to move forward in life.

He has graduated the Liberty Street Recovery Program and enrolled at Ivy Tech pursuing a college degree.  David’s success story continues from here as he strives to remain steadfast in God’s word and trust in Him to provide for all of his needs.

“I am grateful for volunteers who have shown sincere interest in me and the donors who have made my recovery possible.”